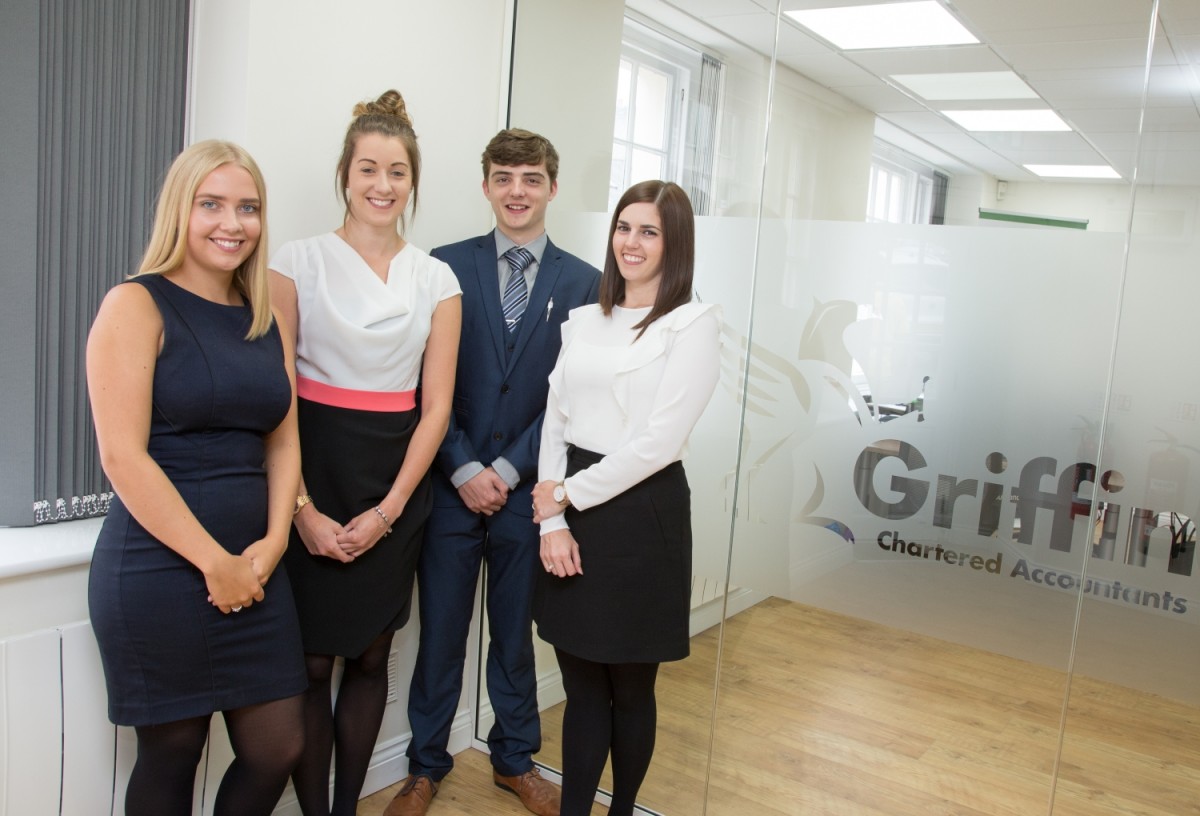 Griffin Chartered Accountants has swelled its numbers by four less than a year after moving into new premises in Honiton – and the company looks set to recruit even more staff before the end of 2017.

Of the four, two are qualified accountants. Jo Davey, who joins Griffin from Thomas Westcott and Stevie-Jean Bessell, previously with Haines-Watts, bring solid experience and future management potential to the company. Griffin is showing its commitment to bringing on fresh talent with two new trainees, Tom Broderick and Andrea Gibbs.

During the same period, the company’s turnover has increased by an impressive 94 percent.

Griffin founder, Graham Higgins said: “We weren’t expecting such rapid expansion, but opening the office gave us a big boost and business has really taken off.

“During the year we have secured clients from multiple sectors, not just locally but along the South coast.”

Griffin provides a range of services including management accounts, personal and business accounts to charities, local businesses and the education sector. The company recently added the Portsmouth and Winchester Diocesan Academies Trust in Hampshire to its portfolio, complementing academy clients in Cornwall, Devon, Somerset and Dorset.

Local business clients include Lynch Motors, an innovator in the design and manufacturing of electric motors, and independent opticians Bills. One major charity client is Exeter Leukaemia Fund (ELF) which switched its accounts to Griffin earlier in the year.

Explaining why ELF chose the Honiton accountants, CEO, Mags Naylor said: “The economic picture explained by Griffin, in a non-financial manner, allowed Trustees to have a greater involvement in understanding the accounts and thus gave peace of mind and a sense of security over financial governance.

Without the support and advice of Griffin, we wouldn’t have been able to develop internal processes to create huge efficiency savings”.

Graham’s partner in the business is Misty Nickells. The pair founded Griffin in 2015, and in 2016 purchased the historic Globe building in Honiton to refurbish into high quality offices. She said:

“With current levels of growth, we realise the importance of maintaining the same level of client service that has contributed to our success so far.

“To this end we’ve been focussing on internal processes and carefully handpicking new team members to deliver the quality our clients expect.”

“At our current rate of growth, we may well be looking for bigger premises within the year,” Graham added.